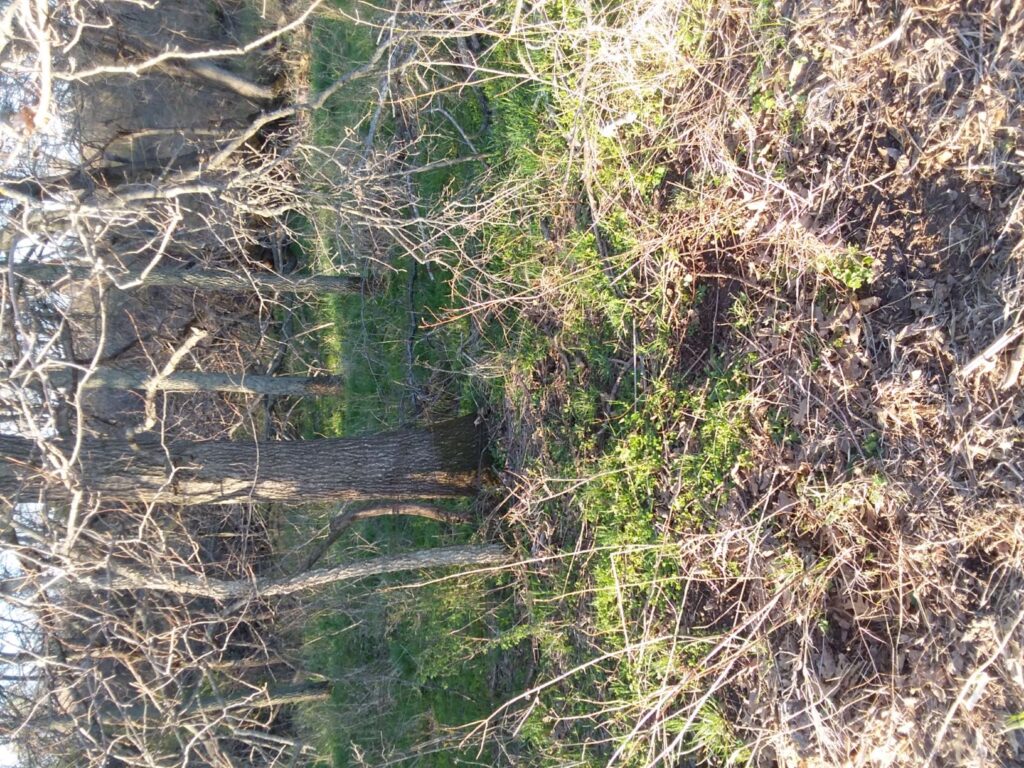 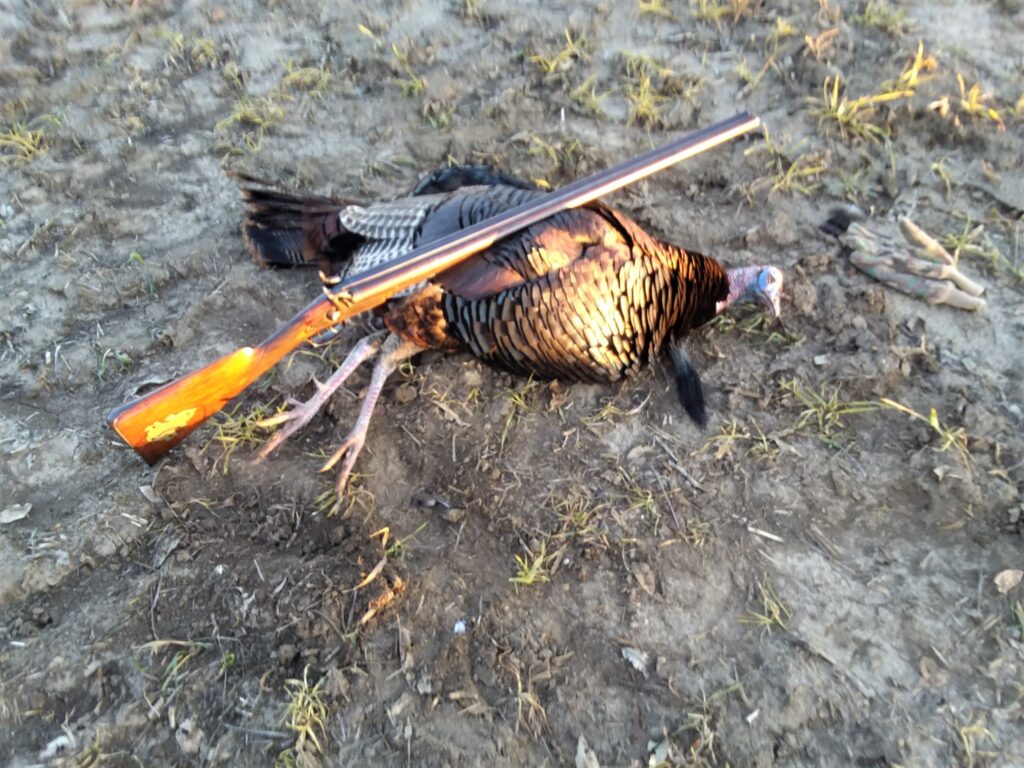 There were no turkeys in the piece of timber that was so good to me in past years. So, I moved the set up to another area that afternoon, which looked out on a long rolling field. Next morning, I did some calling only to watch a gobbler’s fan rise and fall as he worked his way down a rise on the field’s far side about ¼ mile away. When he reached the same line of timber I was up against. He gobbled twice and two hens flew down to meet him. Then they all walked in the opposite direction from me. After about a half hour a gobbler started in on the same rise where the other bird had appeared. I called, trying to get his attention with my 1930. He must have liked it because he ran the full quarter mile to stop just 35 yards away, too far for the cylinder bores of the old gun. Eying my set up he putted, did a 180 and walked off putting in the direction from where he came. While he was still on the horizon I stood where he did and saw the problem. The way an early sun was striking the stick blind and a 40-50 mph wind was fluttering the cut outs made the blind look like it was on fire. Thinking the first gobbler might repeat his gathering of hens the next morning, I abandoned the blind an went to investigate set up possibilities on the far side of the field. There I picked out a tree I thought would be ideal

Next morning, I was at the tree about an hour before sunrise, set out Tiffany and Tony the Reaper, a modified quarter strut decoy sporting a 30” fan, which replaced Lee. It would be an uphill shot since the rise gently lessened until it met the timber line and the decoys were placed about 18 yards away. I laid on my back, head against the tree, gun on one knee, made a few calls and waited. Around 6:45 I saw a fan heading down the rise toward me. I could not yet see the hens in the lead.  When the gobbler got close enough to eye the decoys he took off on a run, passing his hens and stopping out of strut between the two decoys. While ignoring the male decoy, he started to peck at the hen in an effort to get her to squat so he could breed her. It was in one of those moments of stretching out to peck, that the old gun spoke, and he went down with his hens vacating the area in a hurry. This was the 7th gobbler shot with the old muzzle loader. 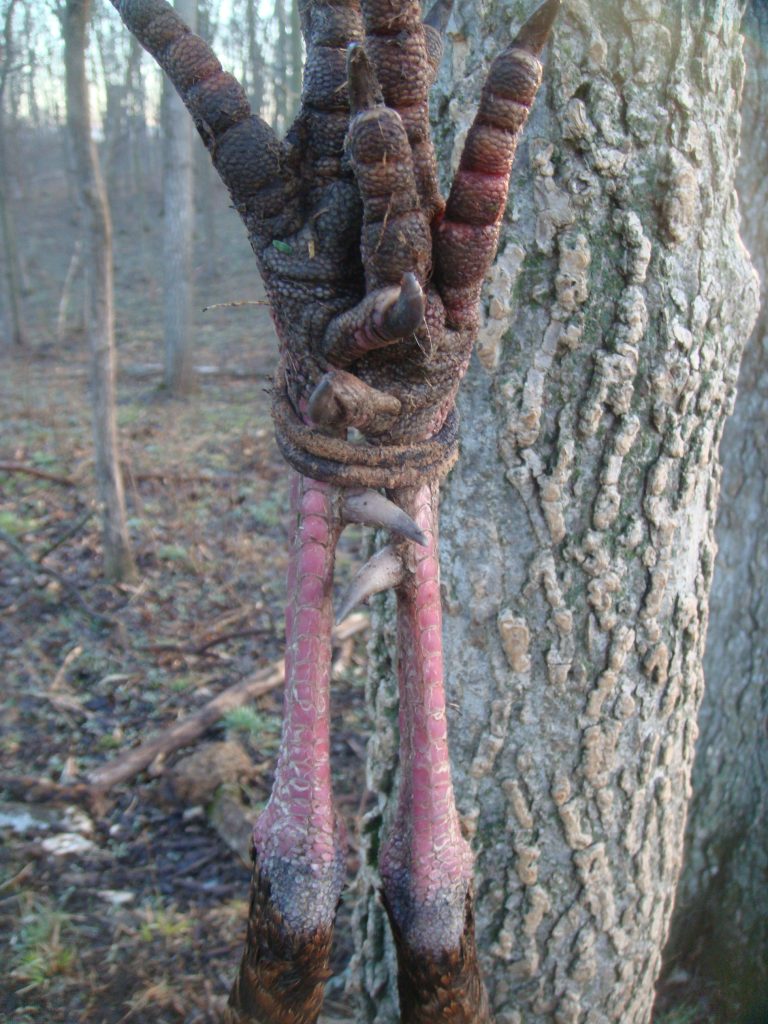 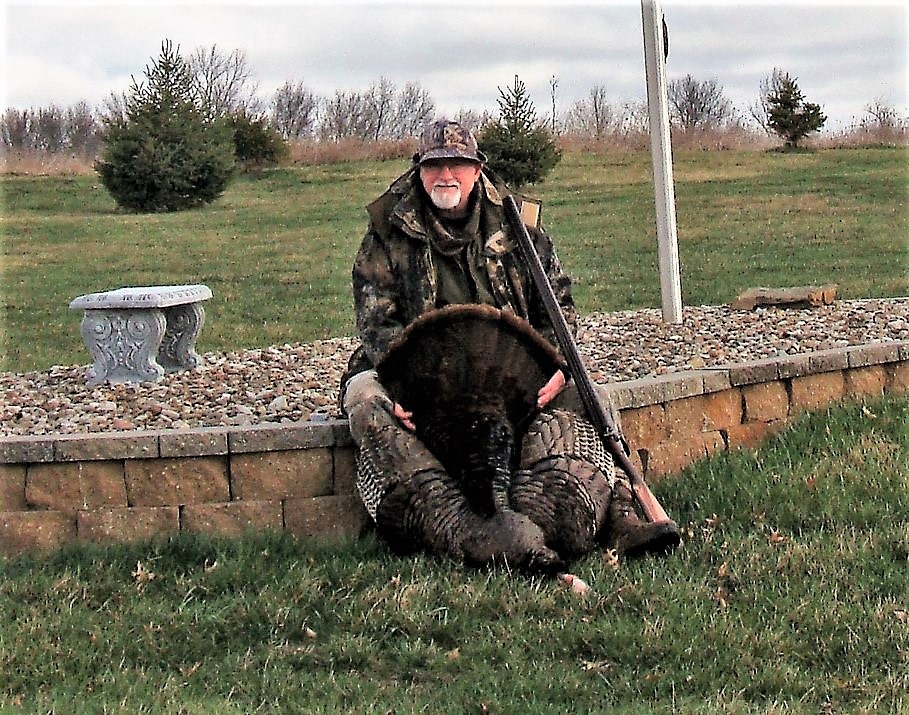 Once again, I took the old muzzleloader, circa 1875, to Iowa for the 2018 spring turkey season.   Spring had not come to Iowa by the Monday of the first season opener as I made my way to the blind I had set up the previous Saturday at the edge of some timber.   To the South, a green field crested approximately 50 yards out, then sloped gently down to a long bottom.   A brisk 25 degrees and 30 mph wind set the real feel temp at 11 degrees.    At the time I was not thinking that the stars would line up to present me with the opportunity to shoot the best gobbler in my 42 years of turkey hunting.

For those who are not familiar with my two decoys, they are Lee and Tiffany (no relation to the two folks on the outdoor channel) I have found this pair work well together.   I placed Tiffany 25 yards out in the field and Lee a few yards closer His hard body wore a Jake tail and 5” beard. His custom painted head and hard as nails clear coated eyes were an invitation to any dominate bird to “Bring it on!”

I had decided to try and film this hunt with a Sony Cyber Shot camera I have used hunting and fishing for many years.    I also started carrying a small tripod so I can include myself in the photo when no one else is available.    However, this goes against my own advice of, “take photos or shoot, don’t do both”.

There was no gobbling this overcast morning as 7:30 came and went, so I decided to give a few yelps and cuts on the 1930 style yelper.    Soon after I heard purring behind and to my right.    Six Jakes appeared, the downfall of any mature gobbler who wanders into their area.    They walked up to but did not engage the decoys, then apparently lost interest and walked off back into the timber.    I got them on film and thought “This filming thing is easy, if a gobbler shows up he will be a movie star.”

After waiting half an hour, I called again and here come the Jakes.    This time I got out of the blind and chased them off. Feeling confident they would not return, I waited another half hour before letting loose with my pill bottle call.    It was not long after before the tip of a full fan appeared outlined against the sky, as a gobbler started to crest the hill in front.    I switched the camera on making sure it was dialed in. At that moment the tripod pitched forward, so I put my foot on it’s back leg to get it repositioned.    By this time the gobbler had zig-zagged his way up to Lee’s right and had his head on the opposite side of the decoy’s tail fan from me.    Now totally mesmerized with taking care of business the gobbler started to pivot to his right.    When his head disappeared behind his fan I cocked both hammers back from safe position, settled in, and gave him the “Good Morn’in” yell.    No response!    It took five more salutations to bring him out of strut and standing tall before he dropped without a flop and the smoke cleared away on the morning wind. It was 8:30AM

Wow – great footage, even though my foot came off the tripod leg and it again pitched forward at the shot, I still had the hunt captured – It was not to be.    There was no recording.    My advice came back to me.     I came to the conclusion I had not taken the camera off standby to record when pushing the shutter with my gloved hand and concentrating on the gobbler.

Getting back to the turkey, when I rolled him over he started to flop, so I let him go but had a glimpse of his spurs and glad I did not grab those legs while he was still kicking.    After he finished flopping I picked him up and knew compared to other birds I shot, he was more than just another heavy Iowa gobbler.    When I put him on the Rapala scales they read 28lbs 6oz! Beard measured 10” and spurs were 1 7/16” and 1 1/2” for an unofficial total of 77.75 points.    This bird’s wing tips were little worn.    He had a great amount of fat and a very large breast sponge.    The gift of the coldest Spring Iowa has seen in 137 years. 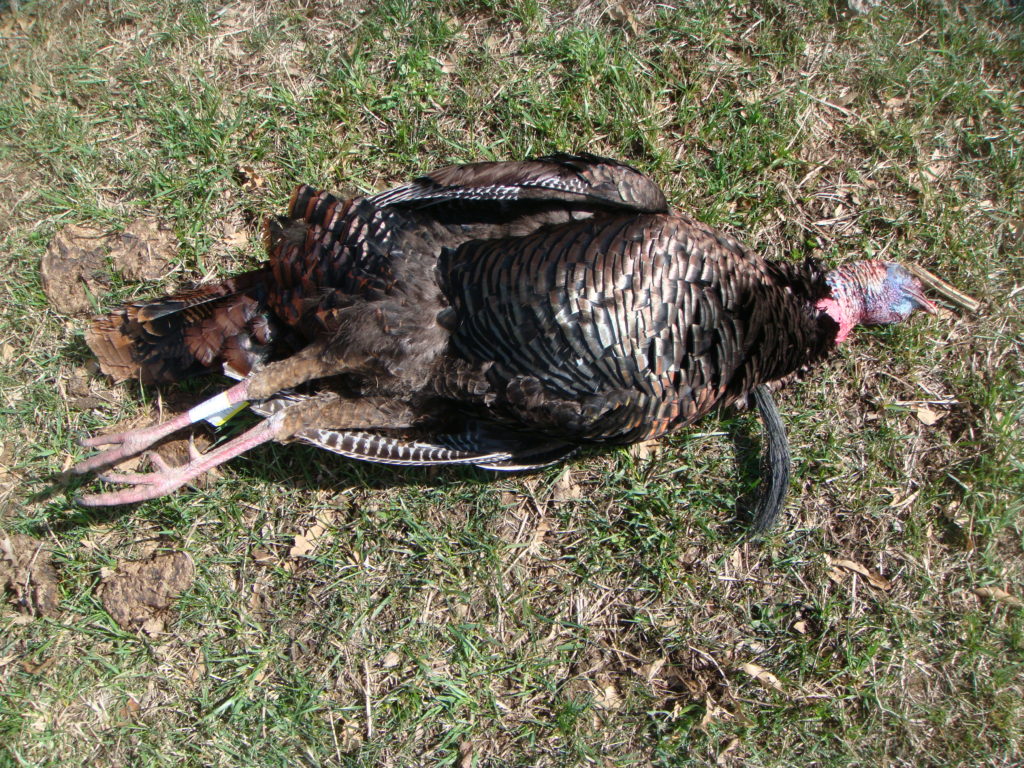 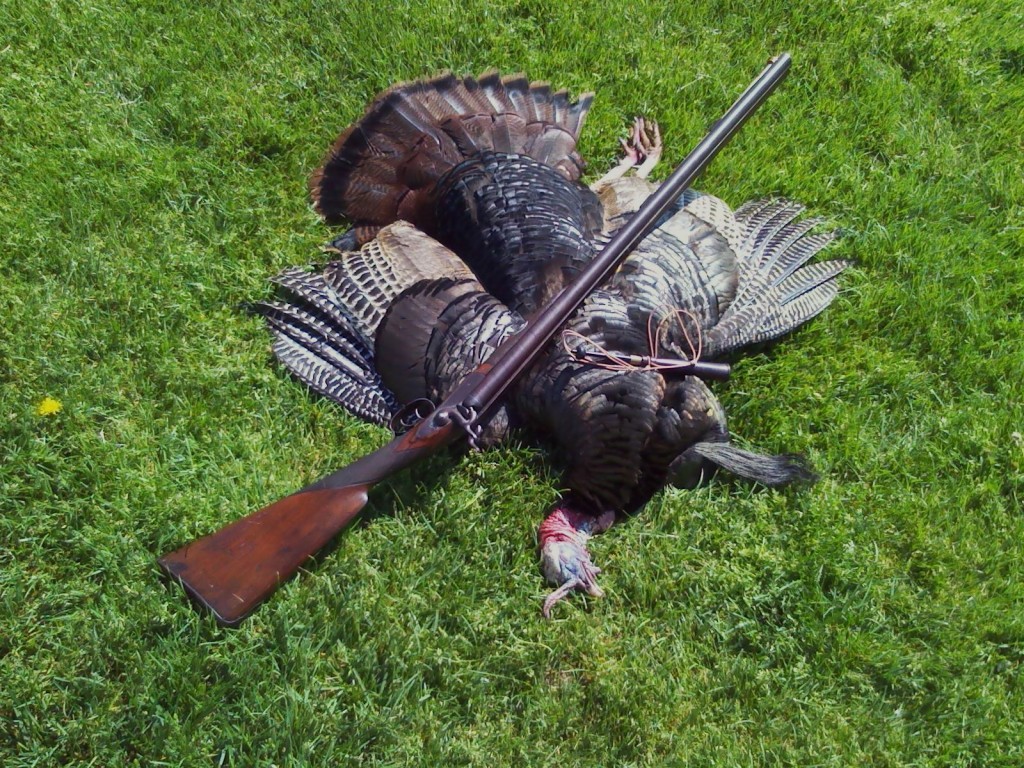 Having no previous experience with black powder guns, I purchased a vintage 12 gauge muzzle loading shotgun from Dixon’s Black Powder Shop in Kempton, PA.     I wanted to shoot a turkey with this gun in a bad way.     To do that I needed the gun to kill a bird with confidence out to 25 yds.     After a lot of trial and error I got a load that would put 12 to 14, #7 nickel plated shot in the brain and neck bone at 25 yards with good penetration.     When the 2010 PA season came around I was ready.     The  gobbler in the photo had a jake with him.     I had called both birds in just after sunrise, but made the mistake of having a decoy out.     The Jake came in behind me and left putting.    The gobbler came in a few minutes later strutting, and gobbling all the way, but would have nothing of the decoy either.     After stuffing the decoy in my vest I went off to find another bird.     Finding none, about an hour later I came back to the area from a different direction to where I thought the same birds might be.     After setting up at the base of an old hemlock in a creek bottom, I let out some yelps on a box call.     Both birds answered but they were not together.     In a few minutes they joined up 75 yards in front and stopped.     After working them with a slate, then a tube, they still did not budge. I got out my Roanoke yelper, a call I designed and built, then gave them four gobbler yelps.    They immediately started toward me.     I dropped the gobbler at 24 yards. 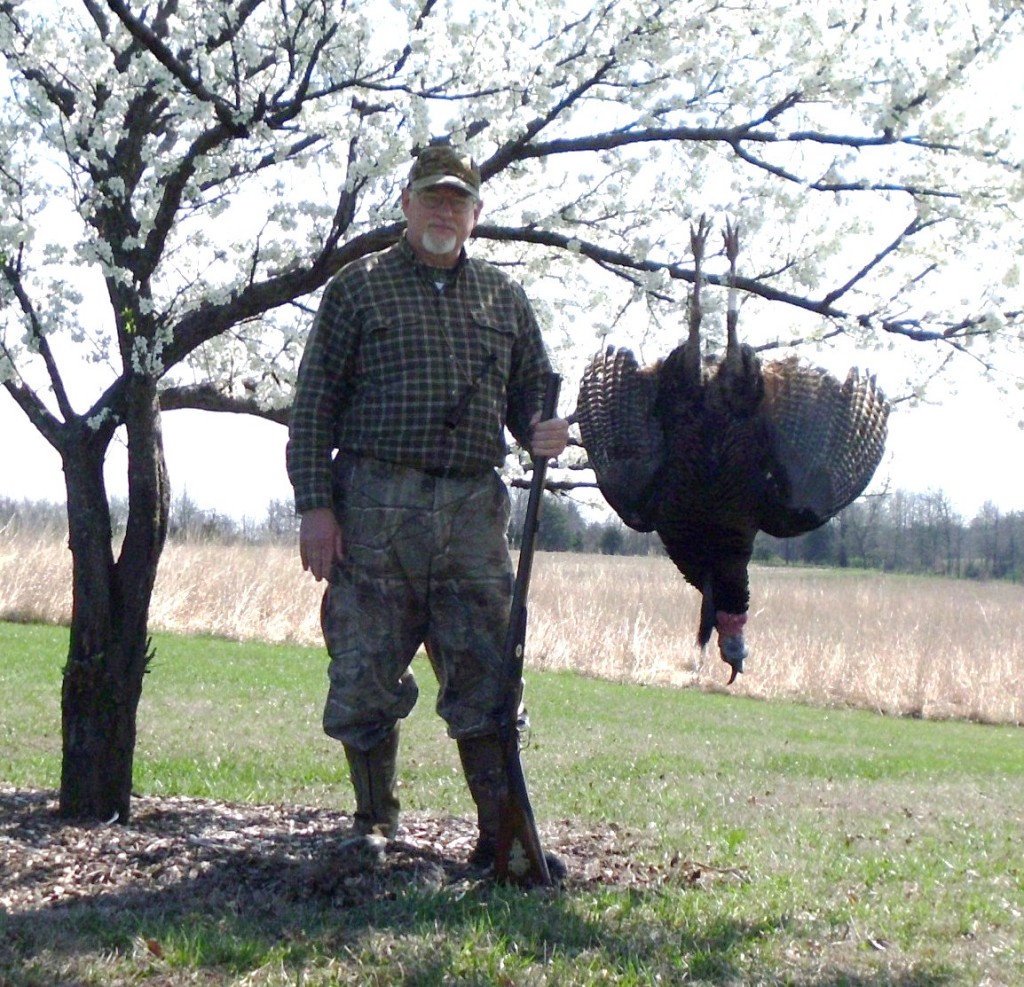 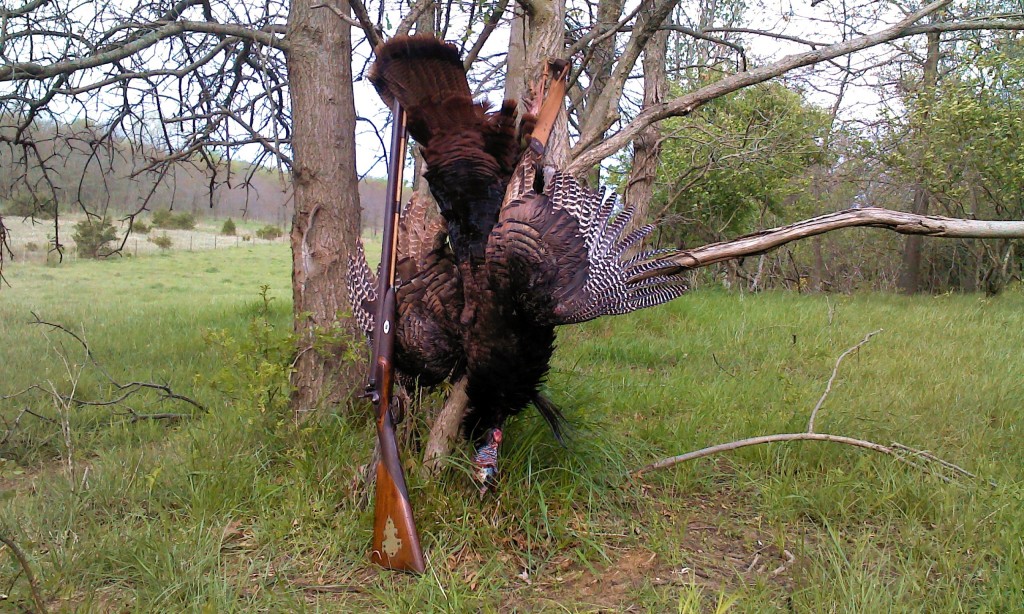 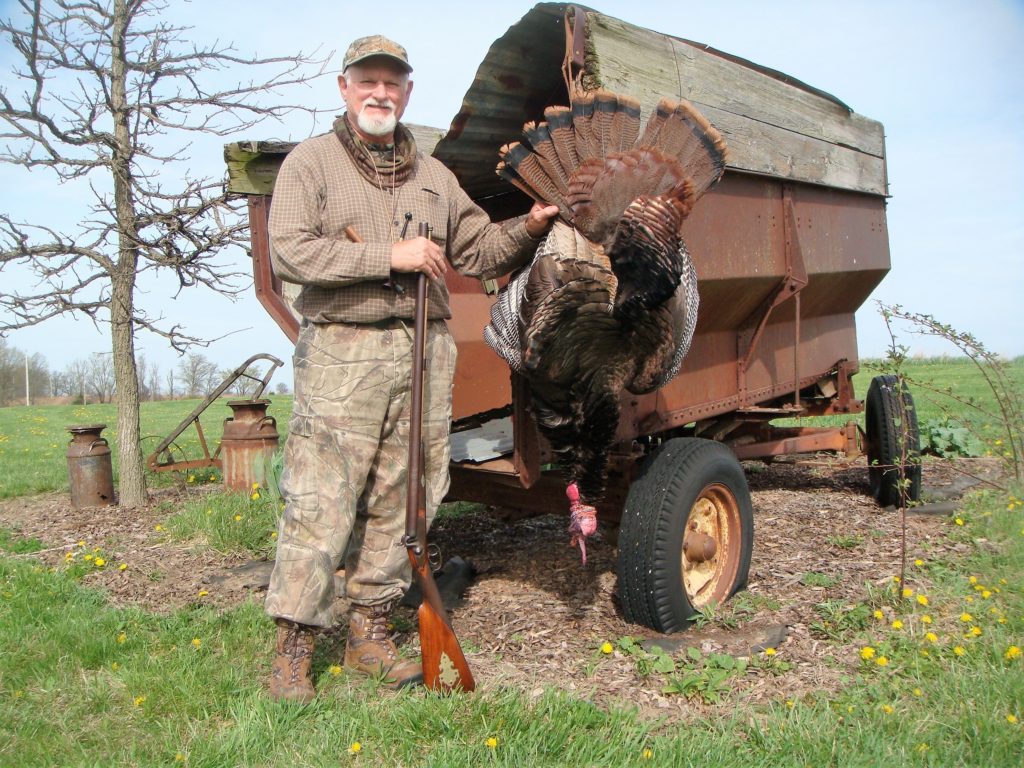 Took the old muzzle loader to Iowa for the 2016 first season.     Had been practicing with it all year with a killing pattern at 25 yds.     The best thing about the gun was that it shot where it was pointed.     I was over run with jakes in 2015 so thought there would  be plenty of mature birds to go after.    Day before the season opened I set up in a favorite spot on the South  side of some timber that rolled 200 yards behind me and placed Lee and Tiffany’s stakes 20 yards out in the short grass of a green field.    Reports were that there was not much gobbling going on during the previous week.     First morning, set the decoys on their stakes and waited for the surrounding world to wake up.     About 5:30 songbirds started and I got ready for the first morning gobble – none came.    Sun was ready to break the horizon and still no gobble.    Then about 6:30 far to the East came a faint gobble.    I put a loud commotion of turkey talk into the air and hoped.     Nothing!  10 minutes later did the same routine and a gobble came from half the distance of the first.    Now the Old Geezer’s heart started to pound.     A few minutes later a gobble came from the North side of the timber and I gave some jake yelps from my Roanoke Trumpet, some hen talk from the 1930 and shut up.    It was not too long before I heard a second bird with the first, it sounded like they were stuck in the same location on the North side.    What was happening, was when I finally saw them an hour later, they were taking two steps, spit, drum and turn from side to side, then two more steps and repeated the process.     They proceeded up through the green foliage, sunlight reflecting off iridescent feathers, white heads looking like they were pasted to the fronts of their puffed up bodies, reaching the decoys, they strutted and twirled.    I sized them up; beard length, posture, both looked and behaved the same, neither taking on Lee or jumping Tiffany.    I would like to meet the gobbler that put them in their place.    I decided that the first gobbler to come out of strut at my  “Hello” would get the lead.    Bird on the left did, and went down at 8:15.     23lbs,  11″ beard and one spur 1 1/8″ the other broken off.    After getting home I was putting the tail fan on the drying board and noticed that feathers on each side overhung the boards edges which was unusual.    Measuring  proved it to be a 30″ wide fan!    A first for me.