New: The Archibald Rutledge Turkey Call in the Stories Section

Spitting and Drumming Revealed in the Stories Section.

Sound of a Carved Blowing Horn made for the NWTF national convention, 1st place hunting Collectables 2020 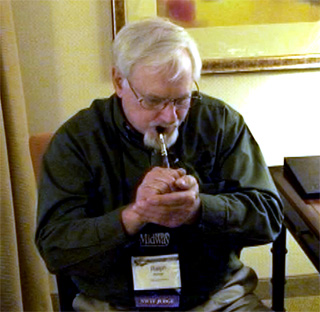 Ralph Permar’s interest in call making history, along with his interest in turkey hunting led to a desire to learn more about how these birds were hunted in the late 1800s and first half of the 1900’s.  During a study of that era’s turkey hunting masters and their calls, he decided to make a suction type yelper.  Experimentation had him trying all kinds of materials, man-made and natural.  After some time the calls improved to the point where they would imitate the yelp of a hen turkey.  The people who most influenced his call making are Larry Proffitt for his mentoring skills, Earl Mickel, now deceased, for his encouragement, and Parker Whedon, also deceased, for his knowledge of turkey hunting, and vintage calls.  Ralph had the honor of visiting with Parker and examining calls, first hand, that normally are only seen in books on the subject.

Ralph’s calls are known first for their quality of sound.  Another characteristic commented on by hunters who own these calls how easily they are to run.

Ralph makes many different styles of yelpers.  He has his own original designs but also creates interpretations of vintage yelpers.  His turned barrel calls have custom mouthpieces, and brass ferrules stamped with the call’s number on one side and Ralph’s initials on the reverse.  Calls have consecutive numbers according to style.  Low production and high quality make these calls also very collectable.