When  you  only  use one caller, you  will learn to master it like no other.

So it was with Roanoke River Basin Calls, referred to in the future as the caller. Each serious turkey man of modest means made his own call. I asked  Parker  Whedon  if he had  found  evidence that  these old turkey  men ever used another type of call made by someone else and available at the time, meaning early 1900s.  His answer was “No, not yet.” 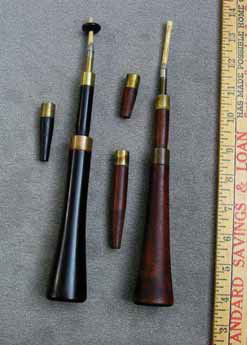 He followed up with “I guess it’s like a public speaker or politician who never hears a sweeter sound than that of his own voice.” Parker referred to the present  hunting  environment as the “new age” hunting  we have to put up with.

Guvnor Roan was raised by his uncle, Will Harrell.  Will was a friend  and  hunting  compan ion of Simon Everitt. This is well documented in Everitt’s book Tales of Wild Turkey Hunting. Roan made his caller from scratch  as did most hunters or had someone else make them. These “home- made”  callers  were  put  together  from  whatever was handy or available as long as it had the right size hole in it or could be modified to make do. It was a trial and error experience. No lip stops— thumb,  index and middle fingers were employed for that purpose.

Callers were pitched to the yelping of immature gobblers, birds of the year. There was no spring season. Turkey hunting in the early days was a winter experience. Hen wing bones were the favored  mouthpieces (hens were protected  in the 30s and 40s, reach your own conclusion).

There were no mating tapers as in the Frank Harpers, as long as the connection between horn and coupling was air tight, that was adequate. Callers were capable of old hen assembly yelps with results. Kee-kees were a product of the users ability, not a high pitch built in the caller.

Jim Stephenson  who authored “Big Woods Turkey Call,”  also supplied me with Roanoke di- mensions and photos.  He and Frank Harper knew each other.  They were both  from Raleigh, North Carolina. Frank  invited Parker  to hunt  with him “Guvnor” Roan who made his own calls from scratch and was 69 years old at the time. This was the early 1960s. As of 2003, Roan had been dead about 30 years. Using Roan’s caller as a model, Frank enlisted the help of a local wood worker  to make “horns,” (bell parts) and couplings as Roan called  them,  of various  woods  and  dimensions. Horn  dimensions  were kept  constant while cou- pling and  mouthpieces were interchanged to get the optimum sounding  combination for the indi- vidual using the instrument. Changing  couplings and mouthpieces was not for duplicating the sound of an individual  turkey that was calling back to a hunter. 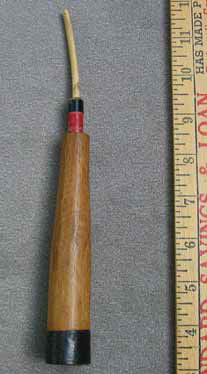 The main difference between traditional Roanoke calls and  Frank  Harper’s  design was a three-piece call with flared horn, while traditional calls were two-piece with coupling and mouthpiece being one and the horn being cucumber form in shape.

Caller  barrels  varied  from  4-7/8-inches  to 5-1/2-inches.  I have made  some 6-inch-long  but the extra  length did not seem to make any differ- ence and  was a waste  of good  wood.  Couplings ran from as much as 3-inches or more,  to 1-1/2- inches for experimentation. The optimum  length usually  was 2-1/2-inches. They were bored 3/16, a few 5/32, with a section drilled  out  to 1/4-inch OD to accept the mouthpiece which commonly  was  a hen wing bone. Cane was used at times and Frank also had nylon mouthpieces made up after Turpin.  (I once doubted the authenticity of a Harper call because of the presence of a nylon mouthpiece, to my embarrassment).

A Brief Note on the Simon Everitt Enigma:

In the latter part of  2002  Mike Battey took  up the challenge of finding out exactly what the #50 thread  spool was for, as described on pages 28-29 in Everitt’s book. Parker Whedon’s  advice to Mike was, “I told Mike that the solution  would  begin in finding a #50 thread spool.”

Apparently that triggered the thought process because I got a very excited phone call from Mike. He said he came to the conclusion  that  the spool was used to keep the two parts of the call together, securing the wing bone/coupling assembly inside the horn when the call was not in use. One can see this was an advantage over Roanoke calls where the assembly was kept loose inside the horn.

After Mike described the purpose  of the spool to me, I re-read  Everitt’s description, went to my lathe, turned a part and sent Mike photos that showed its practical application on one of my own Roanokes. His response was “That’s  it!”

One other sticking point was naming Alder as the call’s material  in Everitt’s book.  However,  it was deduced,  when he said it grew in a stalk and had  soft pith,  he was really talking  about  wood from the Elderberry  bush.

It was  through Mike’s  encouragement that Parker  went on to recreate  the traditional Simon Everitt call from Elderberry and # 50 thread spool. According  to Parker,  when  he found  some “Al- der” he was just going to make a few for fun, but he did go on to produce  some for sale. These are real treasures.

It all started with the NWTF Nov-Dec 1994 copy of their magazine. It contained Jim Stephenson’s article “Big Woods Turkey Call.” The patina  and  design  of callers  pictured  fascinated me, but  foremost  it was  an  instrument used  by “Old  Time” turkey men to call birds to the gun. I saved the articles.  1996  brought an article  from the magazine  on the Jordan  yelper and that  was the year I started  making serious Jordan  style turkey calls.

I kept coming back to the Roanokes article but lack of machine and tooling to make them delayed the project  until 1998 when I enlisted the help of my cousin, Ron Shealer, to rough out the couplings and  barrels  since I did not  have a wood  lathe.  I would  finish the caller’s interior,  mount  the fer- rules, turn,  tune  and  install the mouthpieces, all on my new metal lathe. The two courses I took at our local technical school helped.

We entered a Roanoke with an extra coupling assembly at the 1999 NWTF convention in Char- lotte and won first place in the turned barrel trum- pet category.  With that  success I decided to con- tinue  the series of callers out  to 100.  The series has been sold out except for a few numbers we reserved for ourselves.

I arranged to meet Parker Whedon  at the time of my Charlotte trip.  It took a while for Parker to warm up to me but talking turkey over cups of his wife’s Russian tea broke the ice and out came the turkey  calls. Of  special  interest  to  me were  the one caller Roan had given Parker and two from Frank Harper.

I took in all the information I could while trying to appear non aggressive in my reconnaissance. After returning home  Parker  furnished  me with photos  of the  callers.  Remember  Roan’s  callers were completed  by hand,  while the Harpers were machine  finished.  Later  that  year I acquired  the equipment  to make complete  callers on my own but kept my cousin involved with the series of 100. 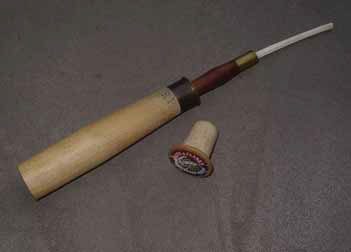 A Roanoke out of Elderberry with mahogany coupling I did with a #50 thread spool, after the style of Simon Everitt. 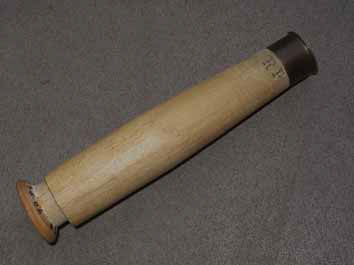 In 2000,  I went to work  completing  an interpretation of one of the Harper’s shown in Howard Harlan’s  book,  plate 3-16,  page 38. I then called Parker  and  asked  his thoughts on me marketing these callers as Frank  Harper-style Roanokes, in honor of Frank and his work. He thought this was a great idea to honor  his friend and was all for it.

In 2006  I made the second interpretive design which I designated  Frank  Harper “B”  style. The “A”  style caller has a barrel  with a 3/4-inch  OD heavy wall brass ferrule and “B” style a 5/8-inch thin wall one with the barrel  walls sweeping in a graceful fashion to the bell opening.

“A” style walls are parallel from the ferrule to midway down the barrel where they flare out in funnel fashion  straight  to the bell’s opening.  It is necessary to name and number things to keep track of them. I have an index file full of recorded  call making activities over the years and a journal with directions on how to make the styles of calls I produce.

Over  the years I have produced many  variations  of two-  and  three-piece  Harper calls. With turned mouthpieces, they can be counted on to be very consistent  in sound  from one to another out of the same wood.

In 2002 I designed my one-piece Roanoke Trumpet which gives the sound of young gobblers with a extremely high degree of consistency of sound between callers, utilizing turned delrin mouthpieces. It also did away  with  the separate parts. My process enabled me to attain a .050 bar- rel thickness without cracking the wood.  This in- creased the call’s resonance.  A few barrels were so thin you could squeeze them between your fingers and flex the walls. A return  to the Clip caller one might say. The Roanoke Trumpet call remains the call I go to today for gobblers that won’t move to any other.

I continue  to make all variations of Roanoke River Basin calls today,  some with  spools,  along with my Roanoke Trumpet.

Correspondence between  Jim Stephenson  of Raleigh, North Carolina and me, 1999-2000.

Correspondence and  personal  visits between Parker Whedon  and me.