There is no better lesson than that taught by the turkey itself.
I will describe in the following paragraphs what took place while going nose to beak with Pip a domesticated gobbler from wild stock. 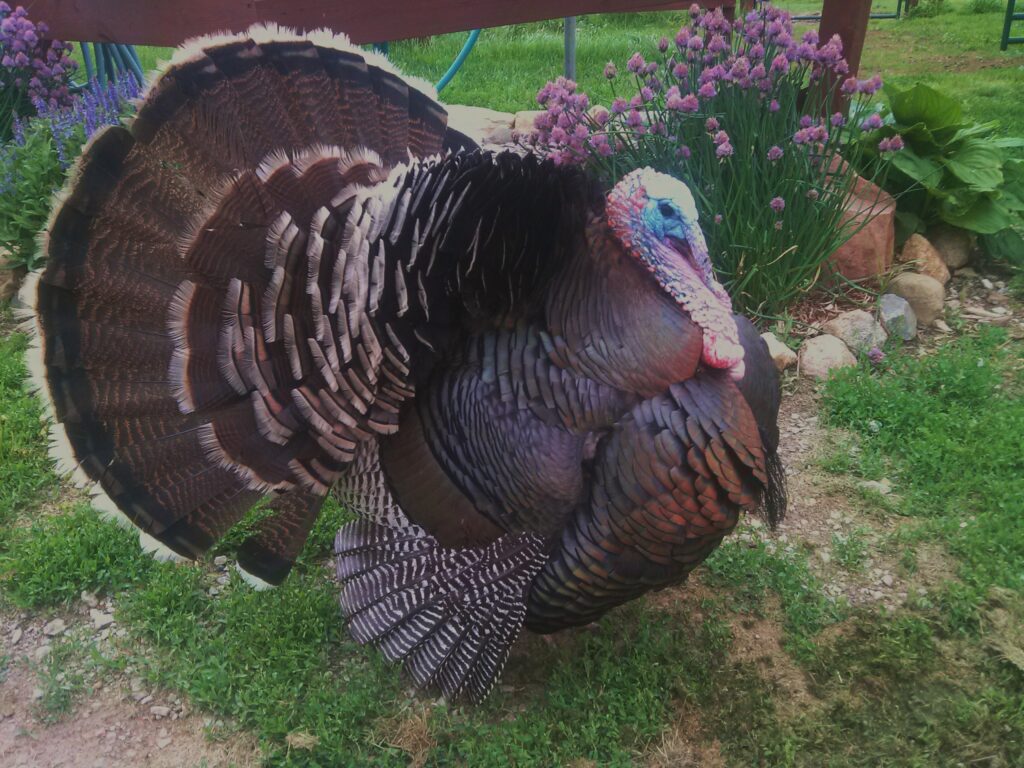 During one of our annual Spring trips to Iowa, we were invited to a farm to see Pip and a hen with poults. Pip and flock mates came to the farm as eggs purchased along with laying hen eggs from a hatchery near Des Moines. They were incubated and hatched on the farm, resulting in turkeys that were very comfortable around people. The hen would cluck softly to her poults as she would shepherd them around the yard. If a poult roamed too far from her it would kee loudly before running back. All the while Pip would strut, twirl, spit and drum tolerating the poults when they got close to his feet.

There have been many theories put forth about the origin of spitting and drumming sounds, usually concluding with the phase “but we don’t really know”. Sensing an opportunity to find out the source of these sounds, and with a warning from the landowner that if Pip was having a bad day, I could get flogged. I crouched down to his level nose to beak, my face only inches away from him, while keeping an eye on his body language.

My observation: The spit sound is the rapid intake of air through the beak accompanied by a rapid vibration of the wings which emit no sound, they just vibrate. The Drumming is created in the chest/throat as that air is exhaled at a slower rate. That’s it! I don’t know the mechanics in the gobbler’s chest/throat that produces a drum, just that it occurs after the spit and during the exhale process.

Pip must have been in a tolerant mood to let me get so close. His body language told me if he started to rise up, bringing his head out of the strutting posture I knew it was time to get taller than him. When I did that, he adopted a less aggressive, dominant attitude and tucked his head back into his chest. Then I could continue my close observation. After a few times of this up and down action I knew it was time to quit.

Side note: I learned later that Spring, Pip traveled down the road to fight with some gobblers at a neighboring farm, He must have come out on top as he stayed. It was not until the landowner coaxed him back home with a pan of food that he returned to live out his life, dying of natural causes a few years later.