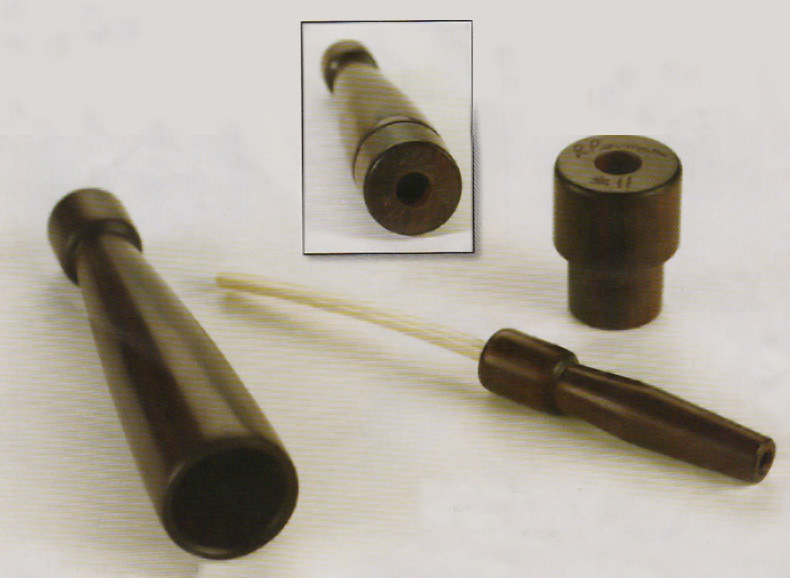 The design of Ralph Permar’s rosewood trumpet call is a strong link to the past.

Soft-spoken, easygoing and extraordinarily talented, Ralph Permar defines the word “likeable” from the moment yon meet him. That’s a joy, because anyone who delves into the world of collecting custom turkey calls soon realizes that it is all too often fraught with egos, jeal­ousy and acrimony. Yet any time I observe these unfortunate aspects of call-making at work, all I have to do is think about Permar and my uneasiness gives way to good feelings.

Born in Pennsylvania in 1945, Permar recently retired after a career with Cleveland Steel. As a call-maker he special­izes in yelpers and has made several distinctive styles with turned barrels, custom mouthpieces and brass ferrules.

In addition, he has always exhibited a special affection for vintage calls. A number of his efforts, which are always numbered and produced in small quantities, reflect that inter­est in the past. Such is the case with this call, the Roanoke River Basin Yelper.

I’m not sure when I first met Permar, but we likely crossed paths as the result of our shared interest in the history of turkey-hunting and the calls that represent the sports most notable memorabilia. He has always been a keen student of the origin and nature of particular types of calls. To my way of thinking, one of his major accomplishments has been his ability to resur­rect historic calls and make them available to today’s hunters and collectors.

Permar’s study of the writings and craftsman­ship of turkey hunting’s old masters led him to try his hand at making calls. He began working on suction yelpers in the early 1990s, and by the middle of that decade was well along the road to becoming a serious call-maker. As his craft grew and evolved, Permar visited my mentor, Parker Whedon, and looked at his collection of vintage calls.

That link is of note because Permar’s Roanoke River Basin Yelper has connec­tions not only with Whedon, but with one of the early giants of the sport, Simon Everitt.

This call follows “Kurnel” Everitt’s design as described in his book, Tales of Wild Turkey Hunting. For decades though, no one could quite figure out the precise nature of that call. Finally, a few years back, Parker Whedon put all the pieces of the puzzle together.

One of the distinctive features of the Everitt call is a stopper (Everitt made them from sewing thread spools) that holds the removable mouthpiece of the two-piece call inside the trumpet end when the call is disassembled. Permar retained this feature for this call, which he describes as a vintage Roanoke River Basin Yelper. The distinction is impor­tant because other calls of a somewhat similar appearance were made by note­worthy, old-time craftsmen such as Frank Harper, as well as some of today’s call-makers.

Thing of Beauty My vintage yelper is No. 11 of 17 calls of this design made by Permar. I couldn’t remember exactly when Permar presented the call to me, but thanks to his meticulous record-keeping, a tele­phone call revealed that it came into my hands on Dec. 29, 2004. (Because that’s my daughter’s birthday I should have remembered and no doubt will from now on.)

The call is, quite simply, a thing of beauty. The mouthpiece section has a knob at the point where the wing bone is epoxied into the wood. Of course, the other end of this section fits into the trumpet in airtight fashion, as opposed to the ferrule junction or union typical of most suction yelpers. Permar employed rosewood for this series. It was an ideal choice because its dark, subdued hue bespeaks old days and old ways.

Other than exquisite workmanship in the turning of the wood, there’s noth­ing ornate or showy about this Permar yelper. The number and Permar’s name are found on the bottom of the spool, there for anyone seeking identification or authenticity, but otherwise out of sight and out of mind. I find this a welcome contrast to the fairly common practice among some custom call-makers of blatantly assaulting your eyes with their name or logo.

To me, the call’s visual simplicity, smooth lines and marriage of two mate­rials most commonly used in early call-making, wood and bone, are among its most appealing features.

To be sure, the call is aesthetically attractive, functional (it produces fine yelps and kee-kees and exceptional clucks), and practical. A knob makes attachment of a lanyard possible if you desire. Alternatively, the “take-it-apart” feature makes it possible to store the call in your pocket should you prefer. That’s the way Everitt carried his call, and assembly requires only a few seconds.

Where We’ve Been The call carries an aura of history that I find particularly pleasing. Just hold­ing it in my hands somehow carries my thoughts back to a time when men such as Everitt, Harper and “Governor” Roan hunted turkeys in the swamps and hard­wood flatlands of eastern North Caro­lina.

As a trained historian, I’ve always agreed with the adage, “You can’t know where you’re going if you don’t know where you’ve been.” This call provides a powerful, poignant reminder of where we, as turkey hunters, have been, at least in the part of the world where I grew up.

To hold, assemble and disassemble it while admiring Permar’s craftsmanship, then look fondly back on the origins of its general design is to enjoy a direct link with the turkey hunting world of yesteryear.

EDITOR’S NOTE: For a free subscrip­tion to Jim Casada’s monthly e-newslet­ter or to check his list of sporting books for sale, go to www.jimcasadaoutdoors.